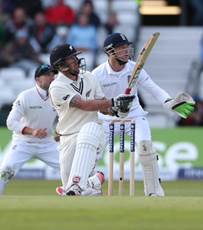 Black Caps Are a Team to Be Reckoned with

“New Zealand did more than enough against England to prove they are worth much more than a two-test series shoe-horned into the schedule as a tasty appetiser before the Ashes,” which begins in July, Ed Osmond reports for Reuters UK.

“Supremely positive, aggressive and efficient, the Black Caps amply justified their status as the world’s third-ranked test side in a 1-1 draw with their hosts which fluctuated from the first ball to the last.

“New Zealand are a team to be reckoned with.

“Kane Williamson at number three has a water-tight technique and the potential to be one of the world’s finest batsmen.

“Ross Taylor, a class act at number four, showed a welcome return to form after a barren run and captain Brendon McCullum is simply one of the most destructive batsmen in world cricket.

“Make no mistake about it. New Zealand, World Cup finalists this year, are the real deal.

“After years of punching above their weight, they deserve to be recognised as one of the forces in the modern game.”

New Zealand play a series of ODIs in England, beginning 9 June in Birmingham.