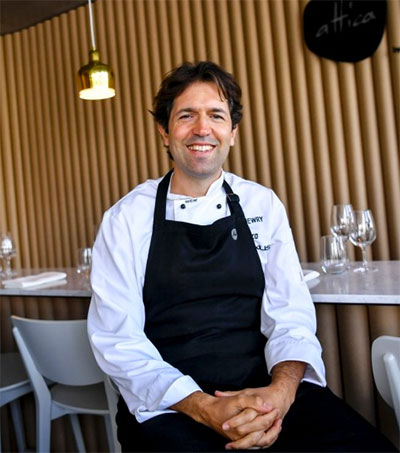 New Zealand-born Ben Shewry has done it again, winning more accolades for his popular Melbourne restaurant. Shewry’s Attica in Ripponlea was named restaurant of the year at the inaugural national Good Food Guide awards and was just one of six restaurants in Australia awarded three hats. One of his team, former MasterChef contestant Kylie Millar, was named the Josephine Pignolet young chef of the year.

The new guide features more than 500 restaurants from around the country, with more than half awarded “hats” – the Australian version of Michelin stars – in the national edition, which originally began 38 years ago as The Age Good Food Guide.

His thank you speech was one more sign that he is an original thinker who’s shown he’s not only one of Australia’s greatest cooks, but also one of the world’s finest.

Shewry’s attire was a nod to Helping Hoops, the Melbourne-based charity he devotes any spare time in his demanding career to, helping disadvantaged kids through basketball.