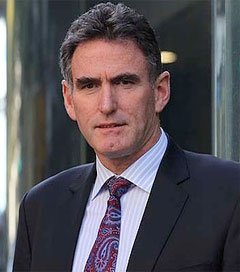 New Royal Bank of Scotland (RBS) chief executive New Zealander Ross McEwan must confront a long list of challenges, according to the Financial Times, and at the forefront of issues facing him, “is the government review of whether RBS should be split into a good and bad bank.”

Alongside Chancellor [George Osborne]’s October announcement of a decision on the good bank-bad bank split, McEwan is expected to sketch out his vision for RBS. There will be scant detail, with the full agenda saved up for fanfare disclosure in a few months’ time, probably with full-year results in February.

But people close to the new chief executive say he will be sure to signal a shift from [outgoing boss Stephen] Hester’s agenda of fixing the balance sheet after the group’s failure and government rescue in 2008, and towards running RBS as a “customer-centric” bank.

McEwan, buttressed by a new finance director, Nathan Bostock, must also decide on his top team.

Whoever occupies those seats, RBS is likely to be managed in a very different way, they say. “Stephen ran the bank on a bilateral basis with each divisional boss. It was very siloed,” says one. “That will change. Ross is very much a team player.”

McEwan was appointed chief executive for UK Retail at the Royal Bank of Scotland in August 2012.