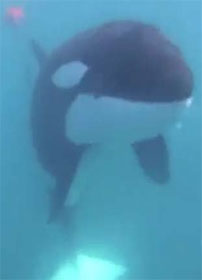 All In A Day’s Work

Hahei diver Rhys Cochrane, 20, rescued an orca he found entangled in a fisherman’s rope attached to a crayfish trap several hundred metres off the coast of Coromandel Peninsula. Cochrane said the whale did not seem to mind when he swam down to cut the rope and said it swam away quickly once it was freed. “It had cuts all over its head from the rope … and down the tail there were a few rope burns and I could see blood from where the rope was,” Cochrane said. He said several other whales had watched from a distance. New Zealand orca expert Ingrid Visser watched the video Cochrane had taken of the experience. She said whales are smart enough to know when you are trying to help them.