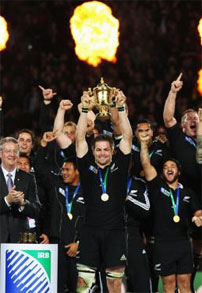 All Hands on the Webb Ellis

“Twenty-four years of Rugby World Cup pain and misery melted away for New Zealand” on 23 October with the All Blacks beating the French 8-7 in a nail-biting final at Eden Park. “It was the first time since 1987 that [New Zealand] had won the World Cup, and it came against the same opponents at the same venue,” The New York Times’ Emma Stoney wrote. “The tense finish — France missed a kick midway through the second half that would have given it the lead — gave way to scenes of jubilation as Andy Ellis kicked the ball into touch to end the game and signal the start of the victory celebration. “It’s hard to describe, I am absolutely shagged,” All Blacks captain Richie McCaw said. “What the boys put out there, we had to dig deeper than ever before and it’s hard to get it to sink in, but I am so proud of every single one of them.” Few in the rugby world would begrudge the New Zealanders their moment considering they have produced some of the finest rugby in the past quarter of a century. All Blacks Coach Graham Henry “It’s something we’ve dreamed of for a while. We can rest in peace.” The Guardian’s Eddie Butler summarised: “New Zealand have won their second title in their third final, by the skin of their teeth. It was all that counted.”