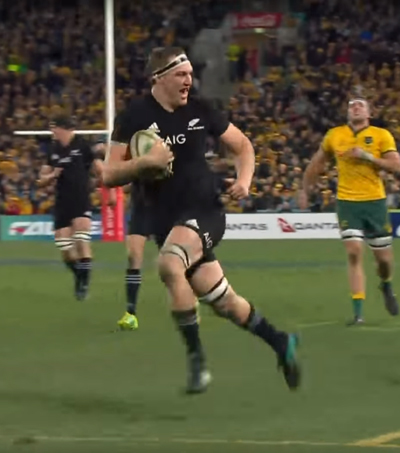 Australia defended stoutly in the first period but invited pressure with a glut of turnovers, including seven lost lineouts, and eventually paid the price. A 25-point margin of victory did not flatter the All Blacks, such was their ruthlessness in broken-field situations.

“They had probably dominated that first half,” said All Blacks skipper Kieran Read in the wake of his first Test since last November’s meeting with Scotland. “So, to get that score was crucial. Then the resilience of the boys was awesome.”

New Zealand’s opportunism was just as special. Each of their five second-half tries arrived from turnovers. In the 43rd minute, Waisake Naholo stripped the ball from Marika Koroibete on the edge of his own 22. Five passes and 70m later, a sweeping move ended in the hands of impressive outside centre Jack Goodhue.

Goodhue’s first Test try was followed by Beauden Barrett’s 26th. The fly-half pounced on a botched backline move from Australia, using his rare pace and poise to dribble the loose ball and gather it.

This was Sam Whitelock’s 100th cap and his 89th victory for the All Blacks. Another this Saturday at Eden Park will send his winning percentage above that Richie McCaw.

In truth, New Zealand appeared fallible at times in Sydney. But they recovered to devastate Australia and have not lost to their trans-Tasman rivals in Auckland since 1986. The Wallabies need drastic improvements to wipe that slate clean.