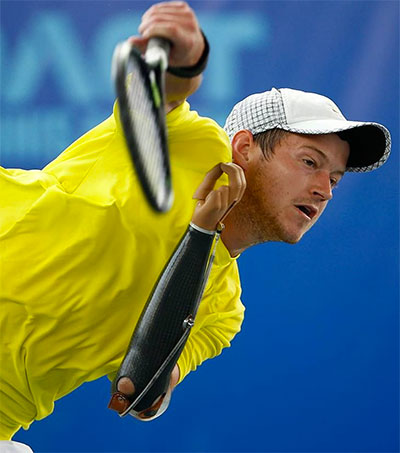 Though New Zealand-born Alex Hunt has only one arm it was enough for the 23-year-old to beat six players and make it to the main draw of the on-going Singha Classic in Bangkok, Thailand.

The Nelson-based player uses a prosthetic left arm to toss the ball. With his right arm he generates powerful, sharp-angled shots that have seen off four players in pre-qualifying and two in qualifying. His latest victim was Punnakrit Kritakara, a top-10 player in Thailand, beaten in the first round of the main draw.

“My entire family plays tennis so I was always around the sport from a young age. I started playing at about three and fell in love with the sport,” said Hunt, who grew up idolising Roger Federer.

“I see myself the same as everyone else,” said Hunt, who loves to pressure his opponents at the net.

Interestingly, the New Zealander neither has a sponsor nor a coach. “I am now travelling on my own with expenses from my own pocket. I don’t have a full time coach. I get tips from different people around the world and I am always looking to learn from those around me.”

Next on his calendar is qualifying at the three-week Hua Hin ITF series, which starts on 5 June. But to achieve his dream of getting a world ranking, he needs to win a match in the main draw.

“I decided to pursue tennis as a career because it has always been my dream to get an ATP point and travel the world playing the sport I love. I also want to show other people who might have a disability that anything is possible,” Hunt said.