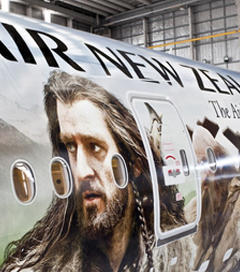 Air New Zealand’s latest short-film sees the airline embrace the magic and whimsy that comes with Middle-earth, with airline crew and airport ground staff sporting features that might only be found in Tolkien’s fanciful land; or perhaps they can be found in New Zealand. One of the film’s stars, Dean O’Gorman, also features.

The Air New Zealand campaign aims to show travellers that “Middle-Earth” is only a short hop away from long-haul destinations such as London, Shanghai, Los Angeles, Vancouver, Hong Kong and Tokyo.

It is the latest Hobbit-themed promotion from the carrier which has also featured Middle-earth inhabitants in an onboard safety video, on the side the side of its planes (pictured).