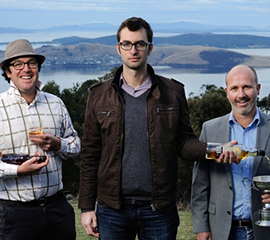 Kiwi Whisky Judged One of the Greats

A top-shelf tipple from the planet’s southern-most country has been named as one of the world’s best by a global whisky expert, Jim Murray. The flagship 21-year-old South Island Single Malt has been adjudged at 95 points out of 100 in Jim Murray’s Whisky Bible 2014, ranking more than 4500 whiskies, few of which score more than 94 points.

Murray is considered the world’s pre-eminent whisky critic, whose influence on the industry is as great as wine connoisseur Robert Parker.

“Great whisky is great whisky,” Murray declares of New Zealand’s South Island Single Malt, and “proof that the country in which a whisky is made is totally irrelevant.”

He said the tipple could be mistaken for “a 30- or even 35-year-old Speysider, almost a grassy maltiness melding into the light, exotic fruit and freshly chopped celery. Clean, delicate and elegant beyond words – if someone asked me how I would like my 21-year-old non-peated malt to come to me, it would probably be something like this: a top-of-the-range 40-year-old.”

The whisky was produced at Dunedin’s Willowbank distillery, which ceased production in 1997, and its stock was subsequently bought by the Whisky Company in 2000. It has been ageing in American oak, ex-bourbon barrels at its maturation store until its recent release.

“All the Dunedin distillers like Cyril Yates can be proud that what they were doing in the 80s and 90s in New Zealand was every bit as good as what the Scots were doing over in Speyside and on Islay,” Ramsay told Bayer.

The whisky is also available in Europe, the UK, Canada and Australia.