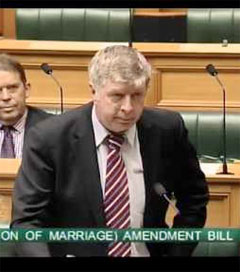 Speaking in support of the Marriage Amendment Bill, National Party MP Maurice Williamson delivered what some are hailing as “one of the greatest speeches ever delivered at a marriage equality debate.” After warming up the crowd with some jokes about a Catholic priest who chided Williamson for “supporting an unnatural act” despite having “taken an oath of celibacy” himself, and the unlikelihood that he [Williamson] will “burn in the fires of hell for eternity” given his “body weight and humidity,” the lawmaker got down to brass tacks: “A huge amount of the opposition was from moderates, from people who were concerned, who were seriously worried what this might do to the fabric of our society. Let me repeat to them now: All we are doing with this bill is allowing two people who love each other to have that love recognised by way of marriage.” The Marriage Amendment Bill passed its third and final vote by a margin of 77 to 44.