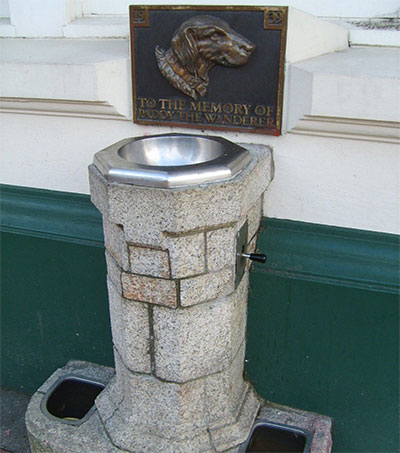 “Paddy the Wanderer was an Airedale Terrier who roamed the streets of Wellington, uplifting the spirits of people during the Great Depression. Not much is known about the dog’s early days. According to one popular tale, he was the beloved pet of a 13-year-old and took to wandering the wharf after his young owner died of pneumonia,” the site explains.

“Paddy soon became a familiar furry face on the docks. He supposedly had a penchant for predicting the weather and was employed by dock workers for security and rodent control, earning himself an official job as the ‘Assistant Night Watchman’. A whole range of harbour workers, sailors, and taxi drivers kept him well-fed and even turn took turns paying for his annual dog licence.

“Paddy’s adventures went far beyond the wharf and he soon became quite the well-travelled pooch. He had a knack for sneaking onto ships and went on a number of seafaring journeys to New Zealand’s ports as a stowaway. He even crossed the Tasman Sea and set sail to Australia a handful of times. Paddy made his way around land, too. Taxi drivers ferried him around town, and tram drivers welcomed him aboard. The dog was even once treated to a quick flight on a Gypsy Moth airplane.

“When he died of old age in 1939, the city nearly came to a standstill. Hundreds of people mourned the loss of their local celebrity as a funeral procession of black taxi cabs accompanied his body across town. In 1945, enough donations were raised to erect a memorial fountain for humans and dogs alike in his honour.”