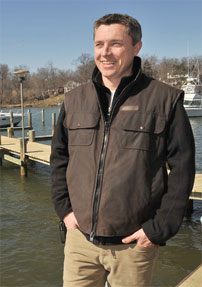 We Bought a Marina

Three years ago, Wellingtonian Boyd Tomkies, 38, combined his childhood passion with a way to support his family – buying what he described as a “failing” inflatables business and recently becoming the owner of what was once Marks Marina in Annapolis, Maryland. Aside from selling inflatables to recreational sailors and boaters, Tomkies also has several police and fire agencies as clients, including the New York City Fire Department. He is also selling parts for the boats to the US government for crafts used by Navy SEALs. Tomkies, who still races competitively, said his years managing yachts has also helped him. “When you’re a professional sailor or managing race boats, you’re kind of running a small business,” he said. “When I wake up in the morning and go to work, I love what I do.”