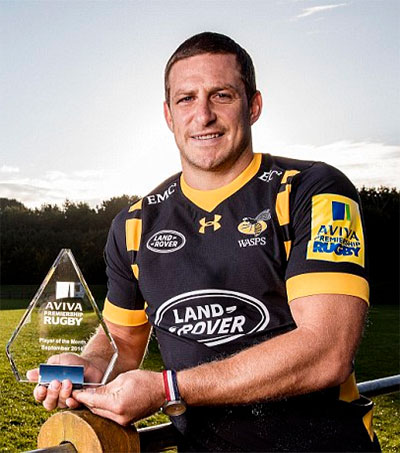 Wasps inside centre/fly-half New Plymouth-born Jimmy Gopperth, 33, has capped a stellar start to the new season by being named Aviva Premiership Rugby Player of the Month for September.

Gopperth – who recently signed a new contract with his club – has been in scintillating form this season as his side finished the first six rounds of Premiership Rugby in second place, losing just once.

He is Aviva Premiership Rugby’s leading points scorer with an impressive 90 from those six games – including three tries – and lies second in the race for the Gilbert Golden Boot behind Bath Rugby’s George Ford.

Gopperth, who won back-to-back Gilbert Golden Boot awards with Newcastle Falcons in 2010 and 2011, has notched up 33 appearances and 343 points in black and gold since joining from Leinster last season.

Ahead of picking up his Player of the Month award, the New Zealander spoke of his delight at penning his new deal at Wasps: “I’m really pleased to have signed a new contract with Wasps.

“The way the club’s going and the direction we’re moving in as a squad, the quality of players and coaching staff we have, it’s just a great fit.”