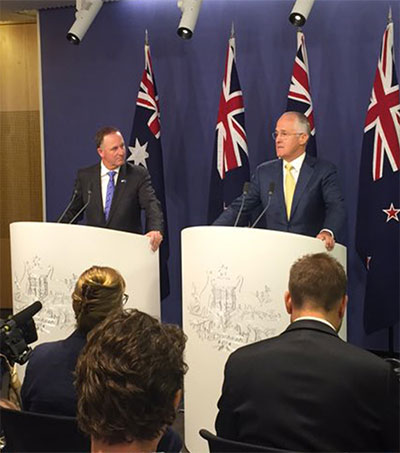 New Zealanders who have lived and worked in Australia for more than five years will find it easier to access citizenship under a deal reached by the leaders of the two countries, the Guardian reported from the announcement made in Sydney.

The Australian prime minister, Malcolm Turnbull, announced the “new pathways to citizenship” after hosting a meeting with his New Zealand counterpart, John Key.

The citizenship deal applies to those who hold a special category visa, the one that lets people stay and work in Australia for as long as they remain New Zealand citizens.

Turnbull said a special category visa holder who had been earning more than A$54,000 a year – the current minimum pay for a skilled migrant – could seek to become an Australian citizen.

“This will enable a large number of New Zealanders who are here and have been working here for five years, to be able to apply for citizenship,” he said.

Speaking at the same media conference, Key said the deal was in response to advocacy “for the plight of New Zealanders living in Australia who have been in a particular category that hasn’t allowed them to become Australian citizens”.

“This step today will help tens of thousands of those New Zealanders to one day potentially become Australian citizens,” he said.

“I think they are fine Kiwis; they will make fine Australian citizens. They will be ones that we’ll both want to claim as great New Zealanders and great Australians.”

The Australian government estimates about 60,000 to 70,000 people will be eligible for the new pathway, available from July 2017.