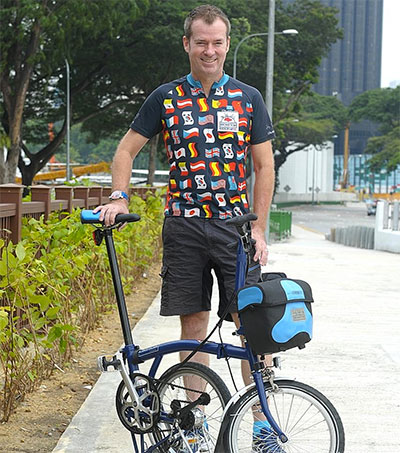 A New Zealander who set out two years ago to pedal his bike on every Singapore road – save those where cycling is not allowed – has finally completed his quest. Stephen Moore, 49, who works at an industrial consultancy, clocked some 11,000km in total.

Moore logged each ride on a cycling website and mapped it out on Google Earth. “If the road had a name, I was going to do it,” Moore told the Straits Times.

Moore started his quest in August 2014, as a way to both explore the island and celebrate SG50, Singapore’s 50th anniversary. Public transport was not allowed unless in emergencies – such as bad weather or a puncture. Cars, too, were out of the question.

He started out with about five friends but they soon abandoned him because “we were going down all these dead-end roads”, he said.

But Moore kept on going. “I wanted to be able to say I’ve been everywhere in Singapore,” he said.

In April last year he realised the island was not as small as he thought, and he was not going to finish before August that year.

“I was getting to the point where I had to cycle one hour or 1½ hours just to get to areas I hadn’t covered.”

The feat has given him a new appreciation for Singapore. Some of his favourite parts of the island include areas off the beaten track that look “untouched by time”, such as the pottery workshops in Lorong Tawas and the Sembawang hot springs.

Moore is originally from Auckland. He has lived in Singapore for 14 years.