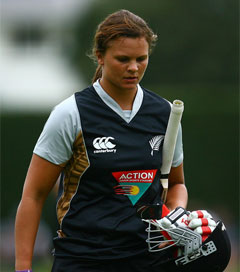 Susie Bates, New Zealand women’s cricket captain, was named Player of the Tournament at the 2013 women’s Cricket World Cup. Bates scored 407 runs in the competition, and was named captain of the tournament’s World XI. But, despite her achievements, New Zealand finished fourth. And, according to The Times of India, Bates feels that New Zealand will not do better in future, unless New Zealand’s cricket board put more resources into the women’s game. ‘I think if we take a hard look at the way the women’s game is going, then in four years’ time, Sri  Lanka, South Africa and West Indies are only going to get better. If we don’t start putting resources for playing more tours and playing more cricket, we are going to fall behind… Maybe it’s a wakeup call to New Zealand cricket that if we don’t make the changes, we may fall behind. I guess that it is one way to look at it… but from a personal point of view, I am pretty proud to receive the award with some pretty good players’, Bates said. She credited neighbours Australia, who won the World Cup, for consistently playing good cricket.