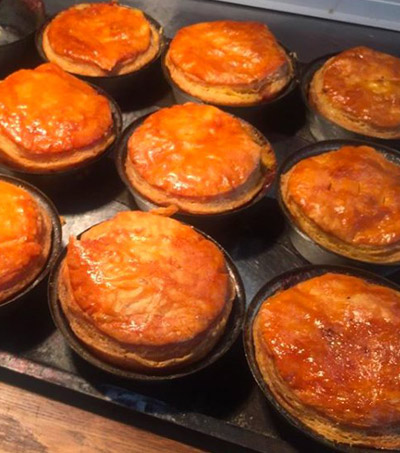 Fine dining establishment Sparrow “is gaining a name for itself for spearheading a culinary renaissance in Lewisham with its focus on high-quality small platters and British produce,” writes Calum Fraser in an article for the South London Press. The restaurant recently invited Holborn Dining Room’s Calum Franklin for a night dedicated to pies to mark British Pie Week.

“I’m a New Zealander and us Kiwis love a good pie – devoting a whole evening to it seems like a perfect night out,” said co-founder and head chef Terry Blake.

“We’ve also been planning on a pie focussed lunch menu for a while, so it’s fantastic that there’s a week out there already celebrating a food we love.”

Fifty per cent of profits from the night went “to Bloom Bakery, a Lewisham charity helping local unemployed people enter the hospitality industry,” according to the article.

“We are such big fans of Calum, his skill in pastry work is just jaw dropping, so we’re really excited to be having him at our little kitchen,” said Terry’s partner and Sparrow co-founder Yohini Nandakumar.

“Even better that the charity to benefit from the evening are doing great work in the area.”