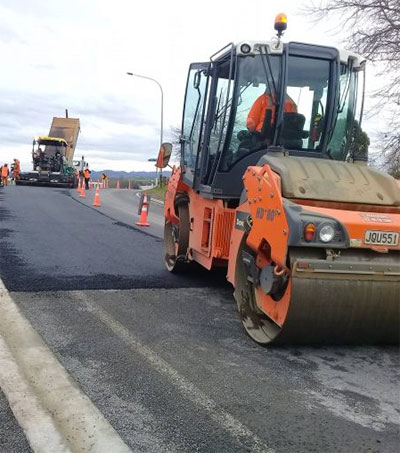 Hamilton has launched a pilot programme that’s repaving roadways with old beer bottles. No, you can’t see a bunch of Budweiser labels when you come to a stop. Instead, the bottles are crushed into a fine sand and incorporated into a beer bottle asphalt, Mike Pomranz reports for American magazine Food & Wine.

“This single project has used the previously non-recyclable material created by almost 12,000 bottles and has produced an asphalt that has, so far, outperformed the existing material,” Uffindell said.

The beer bottle sand comes from DB Breweries, one of New Zealand’s best-known beer brands, which began producing it to combat the number of beer bottles that were ending up in landfills instead of being recycled.

“DB Export has identified this as an issue and has been crushing this waste into usable material for the construction industry – creating about 104 tonnes of DB Export Beer Bottle Sand which is a finely crushed, recycled consumer waste glass,” DB Export spokesman Simon Smith explained.

“This can be used for a range of purposes, including in construction, roading, golf bunkers, DIY projects, pipe bedding and sports field drainage. This new sand substitute is very similar to traditional sand and is completely safe to handle and walk on,” Smith said.