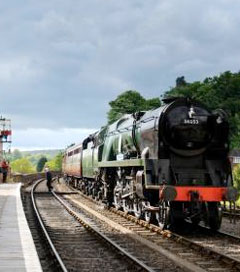 A locomotive renovated after 20 years in a scrapyard has been rededicated to the Battle of Britain legend New Zealander Keith Park it was first named after in 1947. Sir Keith commanded RAF squadrons that defended London and the South East from Luftwaffe attacks in 1940.

Almost 66 years after the original ceremony, the Sir Keith Park locomotive was rededicated at Kidderminster railway station in Worcestershire.

To commemorate Sir Keith’s achievements in the Battle of Britain, locomotive 34053 was dedicated to him and he named the engine himself on 19 September 1947 at Brighton Station.

Also present were RAF veterans who fought in the Battle of Britain, Oliver Bulleid, the grandson of the locomotive’s designer, and Terence Stevens-Prior, great-nephew of Sir Keith.

A flypast by a Hurricane and a Spitfire from the Battle of Britain Memorial Flight was also held over Bridgnorth in Shropshire, where standards were on parade by the RAF Association.

Clare Gibbard, from Severn Valley Railway, said: “Locomotive Sir Keith Park has been one of the railway’s most popular engines since joining our fleet, and we thought that it would be a great idea to mark its return to service after 38 years.”