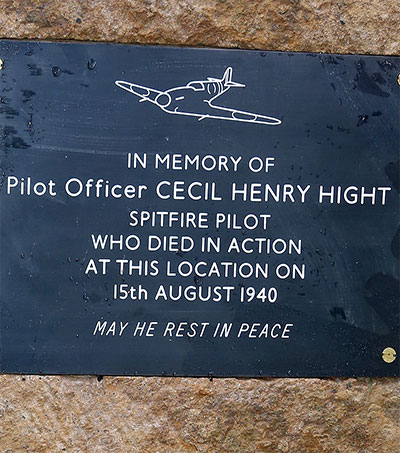 A memorial to a Battle of Britain hero, New Zealand-born Cecil Henry Hight has been placed at the location he was shot down when his Spitfire squadron was scrambled to intercept German bombers on 15 August 1940.

During a dogfight over Bournemouth, the 22-year-old’s plane was shot down, and while Pilot Officer Hight managed to bail out from his aircraft, his parachute never opened, and his body was found under a hedge in the grounds of Hambledon.

The house has since been demolished, however owners Alfred and Edith Hoare created a garden of remembrance where they found the body.

In order to mark the heroic airman’s sacrifice, and on the 75th anniversary of the Battle of Britain, a memorial hewn from Portland stone has been unveiled.

“He was a New Zealander determined to fight and do his bit for the war effort, so he joined the RAF. His plane came down around 50 yards from this very spot.”