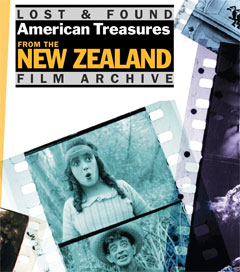 Silent Treasures from the NZ Film Archive on DVD

Over one hundred long-vanished films, including movies by John Ford, Alfred Hitchcock, Mabel Normand, were quietly residing in the New Zealand Film Archive when Brian Meacham, an archivist for the Academy of Motion Picture Arts and Sciences, dropped by its Wellington headquarters during a vacation, writes Dave Kehr, a member of the American Library of Congress’s National Film Preservation Board.

“He was confronted with a trove of nitrate prints of non-New Zealand titles that the young institution had yet to preserve (understandably, the New Zealanders were focused on their own national cinema).

“A dozen of the films will again see the light of day in the new DVD anthology from the National Film Preservation Foundation, Lost and Found: American Treasures From the New Zealand Film Archive.

“The New Zealand find made [worldwide] headlines when it was announced in 2010.

“The present disc presents highlights from the first group of films to be reclaimed, while the project continues; more are available for streaming at the foundation’s Web site. Others will be added as they become available.”