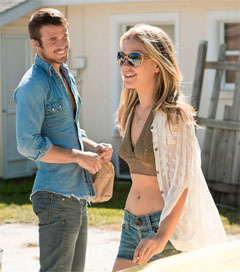 “Paquin balances her character’s two sides: the caring mother and the pragmatic working-class survivor who does what is necessary to survive,” Stephen Holdenjan writes in a New York Times review of the film.

“From top to bottom, [Free Ride] feels authentic, and its laid-back, nonjudgmental tone evokes the easygoing world of Jimmy Buffett songs celebrating how changes in latitude bring changes in attitude. Much of the movie seems bathed in the pink-grapefruit haze of a Florida sunset.”

Variety said: “Paquin, who also produced, conveys a breezy believability, a natural disinclination to look beyond the moment that relates more to the period than to any inherent character flaw.”

Paquin, 31, is best known for her role as Sookie Stackhouse in the HBO series True Blood, for which she won a Golden Globe Award for Best Performance by an Actress in a Television Series – Drama in 2009.