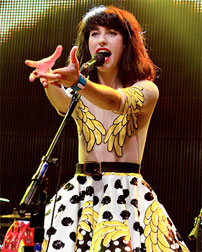 She’s Got the Look

New Zealand musician Kimbra “has the potential to be like Prince,” according to Warner Brothers Records chairman Rob Cavallo. “That’s how strong her musicality is,” Cavallo says. “Kimbra’s a real artist, and I envision her having a 15-to-20-year career.” Cavallo said Warner Brothers became interested in signing her a year ago on the strength of the videos for the singles ‘Settle Down’ and ‘Cameo Lover.’ The label flew her and the band to Los Angeles for an audition. “She killed it,” he recalls. “She’s 22 years old, and she knows exactly what she wants every note on her album to sound like.” Hamilton-born Kimbra recently played her first “bona fide” concert at New York’s Webster Hall. Her album Vows is currently being released in the United States.