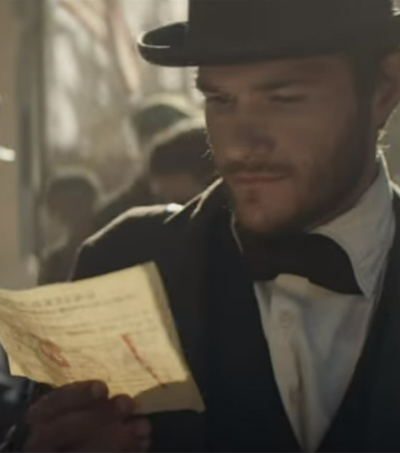 The commercial celebrates immigration in the US was controversial when it aired during the US Super Bowl game because of the news focus on the new U.S. government’s immigration policies. To date it has been viewed 28 million times on Youtube. The ad was directed by Chris Sargent.

“In this film, inspired by a true story, a young man (Adolphus Busch) chases a dream from Germany to America in 1857. Along the way, he endures a brutal sail across the Atlantic, anti-immigrant crowds in New Orleans, a burning steamboat, and a long, cold ride on a flatboat down the Mississippi,” as described on D&AD’s awards website.

“He never loses sight of his dream, sketching out ideas in a notebook he carries with him. When he arrives in a bar in St. Louis, he impresses a man, Eberhard Anheuser. Their handshake lays the groundwork for a partnership that would go on to brew one of the world’s most iconic beers: Budweiser.”

A graduate of the Wellington School of Design, Robert Pearson has 16 feature film credits as a production designer with projects involving directors, actors and producers Julia Roberts, Matt Damon, J.J. Abrams, Michael Douglas, Tim Allen, Sigourney Weaver and J.K. Simmons. Pearson won an Emmy Award for production design for his 2002 television movie James Dean. He first worked as a graphic designer and illustrator for TVNZ before moving to London where he was an art director for BBC. He has exhibited painting and photography in the U.S., U.K. and New Zealand.