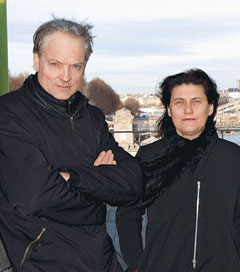 New Zealand-born architect Brendan MacFarlane, one half of Paris-based firm Jakob + MacFarlane, has had his hand in redesigning the French capital’s docks. The New York Times includes the Docks of Paris in a travel article about the city’s ability to mix “modern [architecture] with the classics”. “The [Docks of Paris] complex was once a turn-of-the-last-century depot for goods hauled by boats on the Seine. Now it’s home to the Cité de la Mode et du Design, which includes a fashion school, a few hip shops and, on the roof, restaurants and bars. Climbing the stairs at the riverside edge of the [Cité] is exhilarating and disorienting, but it rewards with fantastic views, and with restaurants and bars whose walls and roofs are made of sloping berms of earth.” MacFarlane received his M.Arch degree from the Harvard Graduate School of Design.