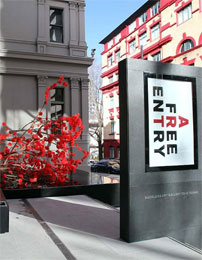 On The Cheap In Auckland

Auckland Art Gallery is one of a “trifecta of frugal activities” recommended by The New York Times’ Seth Kugel on “a day and a half” visit to the City of Sails. “After a three-year overhaul and expansion costing around $100 million, Auckland’s premier art institution reopened last September,” Kugel writes. “And unless you’re there to see their featured exhibition (currently ‘Degas to Dali’), it’s free. Its strength, unsurprisingly, is its collection of New Zealand artists. Most notable about the new museum design is how adjacent Albert Park becomes an honorary work of art itself.” Completing the “trifecta,” Kugel suggests eating a mince and cheese pie at The Fridge in Kingsland and a walk down K’ Road.