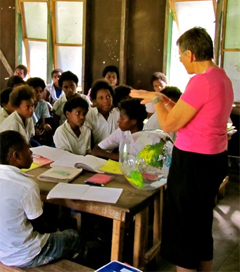 ‘New Zealand has an important relationship with Vanuatu and Shefa Province … and we are keen to work with you to develop your Province, ‘New Zealand High Commissioner to Vanuatu Bill Dobbie recently told Shefa Province President Edward Atavi, according to the Vanuatu Daily Post. Their discussions focused on New Zealand’s aid and development assistance, through the Vanuatu Government, to the Shefa Provincial Government. High Commissioner Dobbie, who is fluent in Bislama, told the Post that New Zealand’s aid to Vanuatu is split into education, infrastructure and tourism. Mr. Dobbie said that New Zealand supports the Vanuatu early childhood and primary education programmes. In infrastructure, New Zealand will fund the Port Vila Sea Front Modernisation Project along with a domestic wharf for inter islands ships, as well as wharves and jetties in all six Vanuatu Provinces. New Zealand is also committed to assist with funding for Shefa’s clean water supply programme. The High Commissioner told the Post he is confident that Shefa Province’s smaller development projects can be completed using funding from the New Zealand Head of Mission Fund.