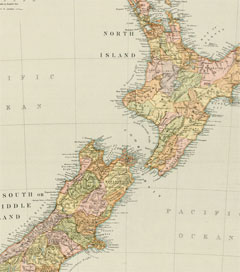 New Zealand could adopt Maori names for its two main land masses after the New Zealand Geographic Board found that “North Island” and “South Island” were not official names under legislation, despite their common long-term usage. “This is a matter of great historical and cultural significance for New Zealand, so we want to consult with the wider New Zealand public,” the Board’s chairman Dr Don Grant said. Captain James Cook’s charts did not even include the English names as options. “It was only from the 1950s that Maori names of the two main islands stopped appearing on official maps,” Grant said. The North Island’s traditional Maori name isTe Ika-a-Maui (the fish of Maui), while the South Island’s is Te Waipounamu (the waters of greenstone).