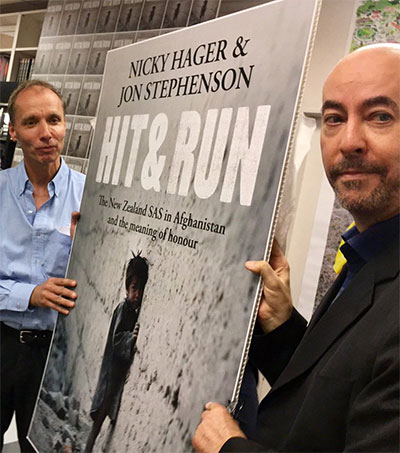 A new book by journalists Nicky Hager and Jon Stephenson claims the SAS killing of civilians in raids on two villages amounts to a “dark and guilty secret of New Zealand’s recent history.”

A botched raid by New Zealand special forces in Afghanistan, which led to the deaths of six civilians including a three-year-old girl, was the subject of a military and political cover-up, according to allegations contained in Hager and Stephenson’s book.

Hit & Run: The New Zealand SAS in Afghanistan and the Meaning of Honour appears to contradict official statements that raids on two villages in Baghlan province in August 2010 killed “numerous insurgents” but no civilians.

In the book, the authors say, “there are reasonable grounds to suspect that New Zealanders and their United States allies were indeed involved in war crimes and other serious breaches of the laws of war”.

The raid in question was launched as retaliation for the death of a soldier in a roadside bomb and signed off by then prime minister John Key. The authors have called on Key’s successor, Bill English, who faces an election in six months, to commission an independent investigation into the case.

In keeping with his practice in previous books, Hager did not seek comment from the government or military officials, largely to forestall injunctions. “You don’t get a comment, you just get people trying to sabotage you,” he said.

The New Zealand Defence Force (NZDF) has rejected the book’s claims, saying: “The NZDF is confident that New Zealand personnel conducted themselves in accordance with the applicable rules of engagement.” It said it stood by its response in 2011 to claims of civilian deaths.

The chief executive of Amnesty International NZ Grant Bayldon has called for an inquiry. “This is crucial, for not only the integrity of New Zealand and its operations overseas, but also for the women, men and children who may have been victims of this raid and have seen no justice,” Bayldon said.

More than 31,000 Afghan civilians are estimated to have been killed since the US invasion in 2001.