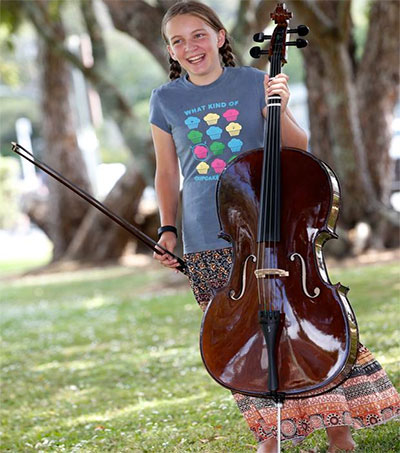 At just 12 years old Sistema Whangārei student Aurian White will be sharing the Northland city with the world.

White, a Tikipunga High School student, is one of 10 students selected from Sistema programmes around the globe to be a World Ensemble Ambassador. She was “speechless” when she found out.

As part of the programme she will submit a monthly report on the Sistema Whangārei programme and the things they’re doing, and share the reports from the other ambassadors with the Whangārei musicians.

White is the only New Zealander in the ambassador network, and is joined by two students in both Canada and Kenya and one each in Brazil, Sweden, the United States, Venezuela and The Philippines.

She is looking forward to “meeting everybody around the world and seeing what they’re doing”.

Sistema Whangārei programme director Sam Winterton said the World Ensemble, which is connected to Sistema Global decided to launch the ambassador programme “so that students in Sistema programmes around the globe could connect with each other and break down cultural barriers”.

The Sistema Whangārei programme is a free community based social action programme using orchestra as its vehicle. It was first introduced to Whangārei in April 2013. It is modelled on the El Sistema programme started in Venezuela. It is run by volunteers and funded by donations and grants.