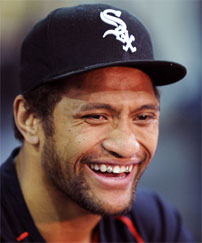 Warriors cult hero Manu Vatuvei averages more than 70m a game from inside his own half, providing the type of quick play-the-balls that ignite Warriors marches upfield. “[Vatuvei is] arguably the most powerful man in the game,” New Zealand trainer Hayden Knowles says. “Hitting the focus mitts at training, he’s Fuifui Moimoi plus 20 per cent.” Speak with Channel 9’s Peter Sterling and he’ll tell you Auckland-born Vatuvei impacts his team like rival halves and fullbacks. There is no missing him. Hasn’t been even since his debut as a teenage debutant all tattoos, dyed blond locks and an aunt’s melted gold ring in two front teeth. Vatuvei, they insist, has more presence than Santa Claus.