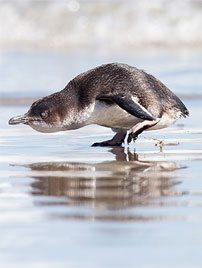 A photograph of a blue penguin moving toward the sea after being released by wildlife workers in Tauranga is included in theGuardian’s ‘24 hours in pictures’ series for 9 December. The penguins were among those affected by New Zealand’s worst maritime disaster when the Monrovia-flagged container ship, Rena, struck the Astrolabe Reef on 5 October spilling 350 tonnes of oil off the east coast of the country. More than 1300 birds, along with other animals, died as a result of the ship’s oil spill.