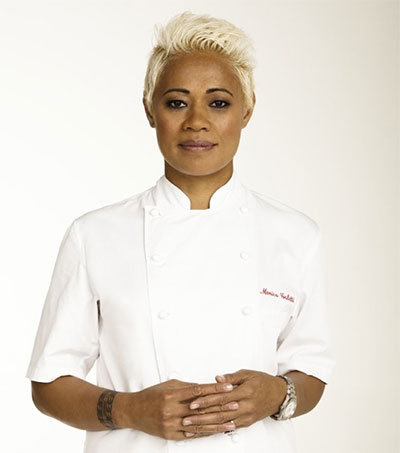 The judge becomes the judged as MasterChef: The Professionals star New Zealander Monica Galetti opens her own restaurant Mere in Fitzrovia, London. The Evening Standard books a table.

“As if leaving behind a two Michelin-starred restaurant to set up on your own wasn’t nerve-racking enough, imagine doing that when you’ve regularly been watched by millions of people criticising the cooking of other chefs,” Ben Norum writes for the newspaper.

“That’s exactly what Galetti has done. After 15 years of cooking at Michel Roux Jnr’s Le Gavroche in Mayfair, ending her time there as senior sous-chef, she gained widespread fame for her role on MasterChef: The Professionals before partnering with her husband David Galetti to open this long-planned site.

“Thankfully for Galetti and her husband, first impressions are good. Even the harshest critic would be hard-pushed not to admire the restaurant’s slick design.

“From plush, deep blue banquettes to marble-look tables and finishing touches ranging from swish staff uniforms to toilet door handles in the shape of M for Mere, the couple have clearly poured time, love and substantial money into what was a former boxy jazz club on the wrong end of Charlotte Street.

“Like the [mushroom] Marmite [tortellini] and the [pork] boil-up before it, the top-heavy [banana and coconut cream pie] has a fantastic sense of fun, and it is flourishes such as this which bring originality and personality to Galetti’s precise cooking and ultimately bring it to life.

“[Galetti] has proved she can deliver more than just critique.”