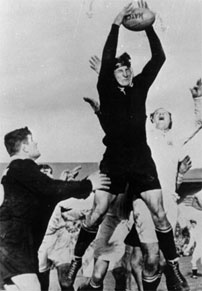 Former All Blacks lock Richard “Tiny” White, regarded as New Zealand’s finest rugby players in his position, has died in Gisborne aged 86. White played 30 matches, including 23 consecutive tests for New Zealand between 1946 and 1957. He was a key member of the All Blacks forward pack that achieved victory over South Africa in a four-match series in New Zealand in 1956, its first-ever series win over the Springboks. He also played all five tests on New Zealand’s 1953-54 tour of Britain and France. Legendary rugby journalist TP McClean had no doubt White was one of the greatest forwards in New Zealand rugby history. “… He played with matchless vigour, especially in the lineout,” wrote McLean, adding that, apart from a fault of trying too much on his own in the loose, he was “a wonderful player.” White also served two terms as mayor of Gisborne.