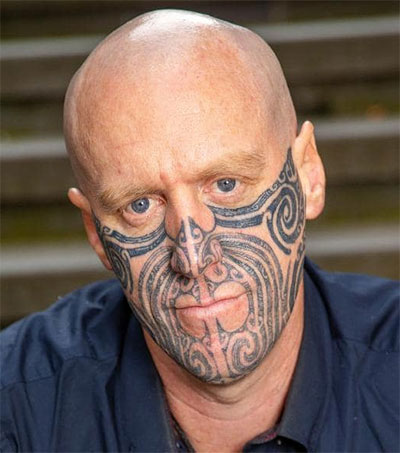 Gary Harding’s body is a living testimony to his heritage. Tā moko, a cultural tattoo artwork, adorns Harding’s face and body, a visualisation of his Māori whakapapa or genealogy, his role in the community and his life’s journey. Tracey Shelton reports on how tā moko is making a comeback after colonial suppression for Aljazeera.

For generations, tā moko was scarce, outlawed and later adopted by Māori gangs, which led to widespread discrimination and stigma that made finding work and social acceptance difficult, Shelton writes.

“My grandparents would get caned for speaking the language at school,” Harding said, adding that tā moko became something that was only seen among tribal elders or in old photographs.

But its image is slowly changing as a new generation embraces tā moko and more and more companies, including service industries, government sectors and even political parties, abandon their exclusion policies.

With young offenders, he strives to instil pride in their ancestry and a sense of self.

“There’s a clear difference between a gang tattoo – that might be designed to be intimidating – and cultural markings,” Harding told Al Jazeera.

In September, Air New Zealand changed its policies to allow all staff including cabin crew, to display the tā moko.

“It reinforces our position at the forefront of the airline industry in embracing diversity and enabling employees to express individuality or cultural heritage,” said the airline’s then CEO Christopher Luxon in a statement.

Rawiri Barriball changed the face of the country’s military in 2017 when he was granted permission to become the first naval officer to receive his facial markings.

Women have also blazed a trail towards renewed acceptance of the kauae.