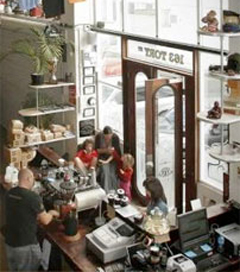 “No part of New Zealand has been more changed by [Peter] Jackson’s movies, and by the growing film-production industry they sparked here, than the city of Wellington,” Michael Joseph Gross writes in the December issue of Travel + Leisure. “Wellington’s show-business success has brought status to the city and helped nurture a vibrant scene of restaurants, cafés, boutiques, and galleries.” Gross mentions the “Castro-kitsch-crammed” Havana Coffee Works [pictured] and the “airy, earthy” Caffe L’affare. “The best bar in town, Motel, became legend when the actors playing hobbits – and the special-effects guys who made the actors into hobbits – made it their off-hours hangout.”