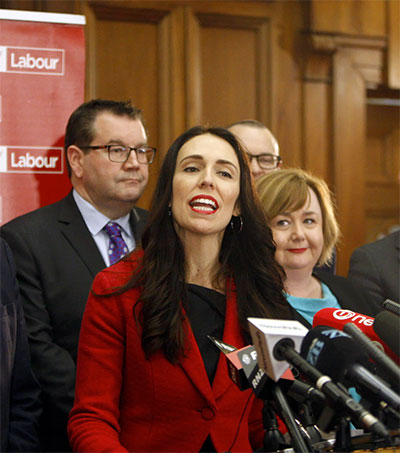 Hours after taking office, Labour leader Jacinda Ardern, 37, faced down pundits asking if she planned on starting a family, a question rarely asked of men in politics. The Guardian takes a look at the rising political star for its Short Cuts series.

“Ardern was unanimously elected as Labour leader on 1 August,” the publication reports. “It’s a big deal, since she’s the youngest Labour leader in the history of the country. She’s fresh and vibrant, and has the potential to become New Zealand’s Trudeau.

“During an appearance on television show The Project … The show’s host asked her the following question: ‘A lot of women in New Zealand feel like they have to make a choice between having babies and having a career or continuing their career … is that a decision you feel you have to make?’

“Ardern handled it brilliantly, though, using it to discuss the impact this ‘dilemma’ has on millions of women everywhere.

“‘It is totally unacceptable in 2017 to say that women should have to answer that question in the workplace; it is unacceptable, it is unacceptable,’ [Ardern] said. ‘It is a woman’s decision about when they choose to have children and it should not predetermine whether or not they are given a job or have job opportunities.’

“She’s got my vote. Mine, too. I’ll get some rosettes made up.

“Do say: ‘Jacinda Ardern is the feminist icon we all need right now.’

Ardern has been the MP for Mount Albert since 8 March 2017.