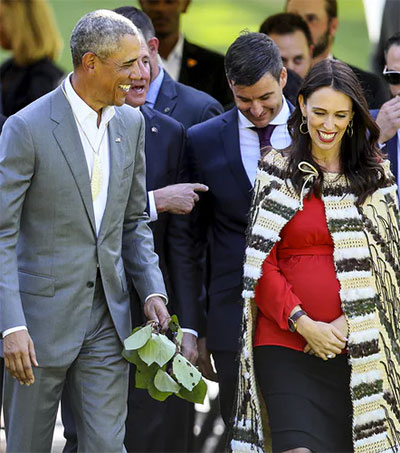 Jacinda Ardern on Life as a Leader

In a Guardian interview, New Zealand’s Prime Minister Jacinda Ardern reveals how her life has changed and her ambition for a can-do country.

This time last year Ardern was known as a young opposition MP with a passion for eradicating child poverty – in fact she could rather bang on about it. She had a well-stocked whisky cabinet, frequently popped up at music gigs, and would return journalists’ phone calls within minutes, at pretty much any hour of the day or night.

Fast forward and Ardern is now the leader of the country, six months pregnant and seeking advice on how to juggle milk bottles and briefings from Barack Obama.

Obama had two young daughters when he entered the White House in 2009, and instigated a domestic regime that allowed him to spend regular time with his family – including nightly dinners.

“I did ask him [Barack Obama] how he dealt with guilt,” says Ardern, who recently met the former US president for the first time. She is in the throes of figuring out how she will balance parenting and the prime ministership. Her baby is due on 15 June and she plans to be back at work six weeks later.

“He just talked about the things you can do. Just to do your best, and that there will always be elements of that [guilt] in the roles that we do, and probably to a certain degree just accepting that; but we are still doing our best.”

Ardern appears to envision an increasingly independent country – contemplating a possible break from the motherland, seeking a louder voice on the world stage, and embracing New Zealand’s unique Pacific history and identity.

“On major issues, on things like climate change, or even nuclear issues, our view has been, and should be important,” she says. “[I’ve] never felt that diminished New Zealand’s view just because we are small and geographically isolated.

“I think our approach to life is the same approach in politics. We’re a very pragmatic people, perhaps because of our isolation, we tend to be pretty inventive as well. We’re not ones to say something is too hard, so when we’re confronted with challenges, be they big or small, we tend to tackle them head on, and without much question – we just get on with it.”