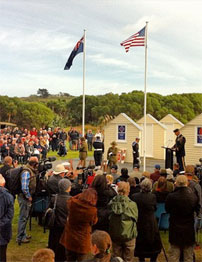 In Memory and For the Future

Several hundred people attended the unveiling of a new memorial in Paekakariki to commemorate the lives of 10 American servicemen who died at the town’s beach when a landing craft capsized during training exercises in June 1943. American servicemen and veterans are visiting their New Zealand counterparts over the coming weeks as part of an effort by the two countries to forge closer military ties, a quarter-century after a rift developed when New Zealand banned nuclear warships from its shores. “I think everybody has just decided it’s more important to look at where we want to go together rather than to allow us to be held captive to the past,” Charge D’Affairs with the U.S. Embassy Marie Damour said.