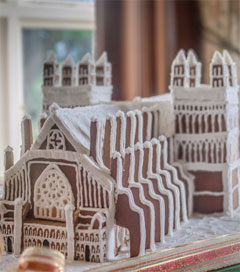 Owners of Oamaru’s Pen-y-bryn Lodge, James Glucksman and James Boussy have built a gingerbread Exeter Cathedral to commemorate the 125th anniversary of the lodge next year.

Glucksman explains: “In a nutshell we always make a gingerbread house as a sort of focal point of our holiday decorations. In previous years it’s been a building that we visited on our travels during the year. This year, however, we did not take any ‘gingerbread-worthy’ trips, so we had to come up with an alternative plan.

“We reckoned we’d do something relevant to the upcoming 125th anniversary of the building of Pen-y-bryn Lodge, which we’ll commemorate next year, and figured since the original owners were from Winkleigh in Devon, and the first town I visited when I took a trip to England on my first-ever overseas trip as a fourteen-year old in 1979 was Exeter, and since I fell in love with the cathedral, and since Exeter Cathedral has the longest uninterrupted vaulted ceiling in England and Pen-y-bryn is the largest single-storey wooden dwelling in Australasia, there were enough synchronicities to make the cathedral a ‘logical’ choice.”

The gingerbread building took approximately a week to make and comprises nothing more than gingerbread, royal icing and caramel for the windows.