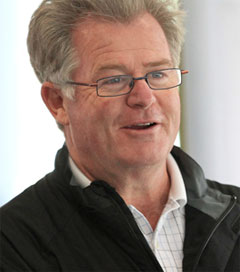 Broadcaster Phillip Leishman, who’s career ranged from regional television in Dunedin to Olympic and Commonwealth Games, and to game show Wheel of Fortune, has died aged 61. “He was an extraordinarily gifted presenter and broadcaster … Phil had a unique ability to relate to people of all ages and backgrounds and he was able to effortlessly build rapport with live and onscreen audiences,” head of TV ONE and TV2 Jeff Latch said. Fellow sports broadcaster and close friend Keith Quinn said Leishman had a deep sports knowledge. “He started off in radio and that spread over to television … and he fronted a lot of programmes,” Quinn told Radio New Zealand. Leishman was a feature of New Zealand broadcasting for more than four decades. In 1997 Leishman formed a new company called Uplink, now known as Sportinc. He was the executive producer, company director and fronted the company’s popular Golf Show. Off screen, Leishman was involved with children’s charity Variety since its inception in 1989.