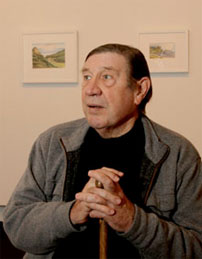 New Zealand artist Don Binney, best known for his striking emblematic paintings of birds, has died in Auckland aged 72. Binney worked in oil, acrylic, charcoal, ink and carbon pencil. Many public collections feature his work, including those held at the Auckland City Art Gallery and Te Papa in Wellington. Binney studied at the Elam School of Fine Arts in Auckland, graduating in 1961 and holding his first solo exhibition two years later. He was awarded a Queen Elizabeth 11 Arts Council fellowship in 1967 and spent time living in Mexico, London and Australia. He was awarded an OBE for services to the arts in 1995. Art historian Hamish Keith said Binney would be missed. “He was a lovely man … his work is deservedly great, and we ought to mourn his passing, because it’s not often you get artists as good as that,” Keith said. Fellow artist Dick Frizzell said Binney’s death was a great loss for New Zealand art lovers. “He was in the first wave of artists in the 1960s who had a great sense of national identity as the New Zealand modernists,” Frizzell said. “He was fabulous with words and was a great personality.”