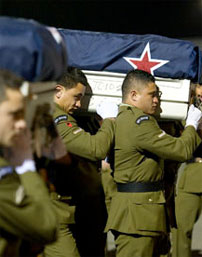 Farewell to the Brave

“Portraits of the three soldiers killed [on] 19 August in a massive blast from a roadside bomb in northeastern Bamiyan gazed out from the front pages of virtually every New Zealand newspaper, including the rosy-cheeked face of 26-year-old Lance Cpl. Jacinda Baker, who had trained as a medic,” Laura King writes for the Los Angeles Times. “In [this] close-knit country, news of the deaths hit like a thunderbolt. The country was already reeling from the news that two other New Zealand troops had been slain in a gunfight two weeks earlier in the same part of the province. To put that loss in perspective, the fatalities represented half of that nation’s battle deaths for the entire war, including its first woman killed in conflict since 1966. Local people are also anxiously wondering how Bamiyan will be affected by New Zealand’s move to hasten the departure of its 150-member troop contingent … about six months ahead of schedule.”