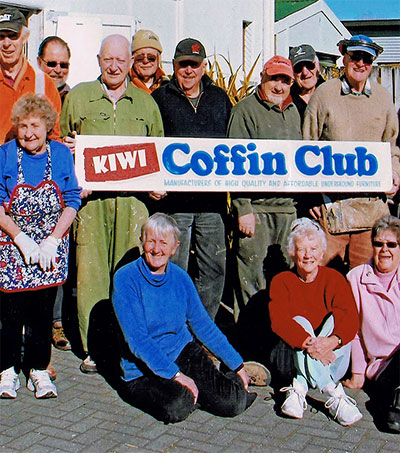 Scores of retirees across the country have formed clubs so they can get together and build their own coffins. They say the activity is cost-saving and helps to combat loneliness.

The original coffin club was founded in Rotorua in 2010 by former palliative care nurse Katie Williams, 77. Since then the model has spread around the country, and there are now a dozen coffin clubs operating in both the North and South Island.

“Because of my work and my age I had become a perpetual mourner,” Williams says.

“I had seen lots of people dying and their funerals were nothing to do with the vibrancy and life of those people. You would not know what they were really like. That they had lived and laughed and loved. I had a deep-seated feeling that people’s journey’s deserved a more personal farewell.”

Williams says the club is particularly appealing to Maori, who often have large families and find the cost of funerals “crippling”, and families who come from “stiff-upper lip backgrounds”, who may have previously found it difficult to confront the impending death of a loved one.

“Our motto is; it’s a box until there is someone in it. And while it’s just a box, it brings us together.”