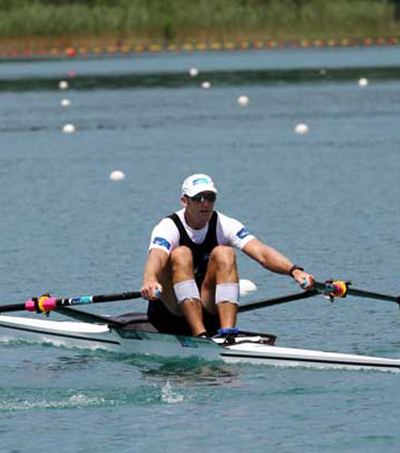 Mahe Drysdale has won gold in the single sculls at the Rowing World Cup, one of New Zealand’s five gold medals at the regatta in France.

It was the first international regatta of the year for Olympic champion Drysdale, 35, who was beaten by fellow Kiwi Hamish Bond at the national championships in February.

The five-time world champion timed his run to perfection after trailing the field through the early stages.

He was fourth at the halfway point and second with 500m to row before powering past Synek to win by nearly 2 seconds, with Cuba’s Angel Fournier Rodriguez third.

The other men’s gold went to the lightweight four of Peter Taylor, Curtis Rapley, James Lassche and James Hunter, who advanced through a repechage to reach the final, where they were too strong for arch rivals Denmark.

Single sculler Emma Twigg added to the gold she won at the first World Cup in Sydney, holding off China’s Jingli Duan and Austria’s Magdalena Lobnig.

The lightweight single sculls were won by Julia Edward, who headed off the more favoured Ruth Walczak of Great Britain.

New Zealand’s sixth medal at the three-day regatta was a bronze to the women’s quad of Lucy Spoors, Erin-Monique O’Brien, Georgia Perry and Sarah Gray.

The third and final World Cup regatta is in Switzerland in three weeks, followed by the world championships in Amsterdam in August.