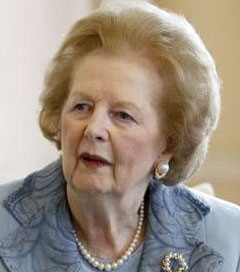 Devotedly by Her Side

A New Zealander, known only as Kate, who cared for the late Lady Margaret Thatcher, would read to the former British prime minister and keep her mind going in her final days, according to Lady Powell, the Italian wife of Thatcher’s trusted Downing Street private secretary, Lord Powell. “She was God’s gift to Margaret Thatcher,” Lady Powell said. Kate had been Thatcher’s carer for the past decade. She was among the small circle of people who attended to Lady Thatcher in the last months of her life, at the Ritz hotel in Piccadilly. As a trained private nurse, she worked fulltime for the former prime minister and served as her cook, her dresser and, most importantly, devoted friend and companion. Kate spent Christmases with the Iron Lady, cooking the turkey before they sat down to watch the Queen’s broadcast.