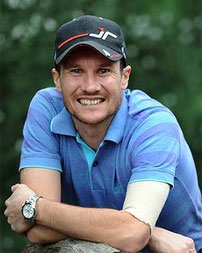 Courageous Man To The End

Nelson-born Jason Richards, V8 Supercar champion “to the last”, has died in Melbourne. He was 35. Peter Kogoy writes Richards’ obituary for The Australian: “His duel at the wheel of the Team BOC Commodore with Garth Tander at the non-championship Australian Grand Prix round at Albert Park in March, typified the man’s courage as he fought the ravages of the cancer that was to ultimately take his life. Speaking from the pit lane at the time, Richards said: ‘I had a choice, either sit on the couch and watch or take the seat and have a go myself. This is my weekend, where I’m living my normal life; the heavy stuff will come later on. I’m just very grateful. Maybe that’s what lifted me to do this today.’ Sadly, Richards lost a 13-month battle with the illness at The Alfred Hospital in Melbourne, surrounded by wife Charlotte and his close family. He was diagnosed with an adrenalcortical carcinoma in November 2010, an aggressive and rare form of cancer. Richards had spent the past three seasons with the Brad Jones Racing team. A team statement released by spokeswoman Lucy Peacock read: ‘In the competitive world of V8 Supercars, Jason was a rare breed — a driver that could tread the fine line between rivalry and friendship. He was never secretive, selfish or bad-tempered and had endless enthusiasm and energy for his job and team.’