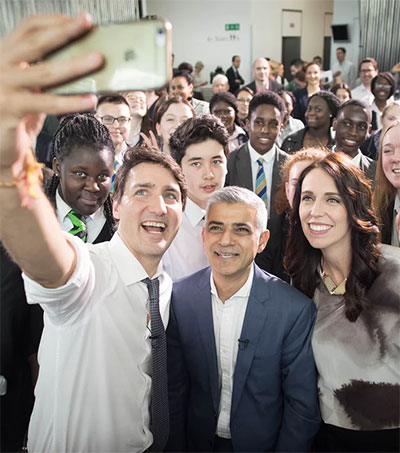 In this Guardian ‘photo highlight’ of the day, the Canadian prime minister, Justin Trudeau takes a selfie with the mayor of London, Sadiq Khan, and Prime Minister Jacinda Ardern, at City Hall during the Commonwealth heads of government meeting.

Ardern joined Trudeau at the meeting, along with 80 students, which was hosted by Khan in London who introduced the two leaders as “two of the leading feminists in the world”.

The Q & A event was part of Khan’s #BehindEveryGreatCity campaign, which celebrated 100 years since women first secured the right to vote in the UK.

New Zealand was the first country in the world to give women the right to vote 125 years ago.

Ardern told the audience it was incumbent upon governments to ensure they were talking to youth about the issues that mattered to them. Her use of the term “skate park syndrome” drew nods from Trudeau and the crowd. It spoke to the tendency of politicians to just give young people a new skate park and not realise that the issues that mattered to them were often inequality and child poverty, climate change and the gender pay gap.