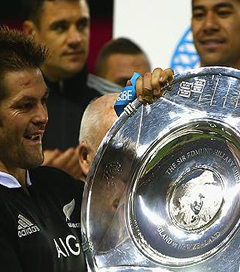 All Blacks Victorious over England

The All Blacks had an eight point victory over England on the weekend, keeping their perfect season intact.

The New York Times’ Huw Richards wrote of the match that the Kiwis were challenged in a way they have rarely been in their previous 12 matches of 2013; a year in which the All Blacks have been trying to become the first top-tier team to win every game since the start of the professional era in 1995.

“It was by no means perfect, but test match rugby is about 15 guys trying to stop you play,” said New Zealand’s captain, Richie McCaw. “It is about winning the moments and taking your opportunities.”

Following their Saturday victory, the All Blacks now hold every single trophy available to them, including the Rugby World Cup, the Bledisloe Cup, the Rugby Championship, the Hillary Shield and the Dave Gallaher Trophy.