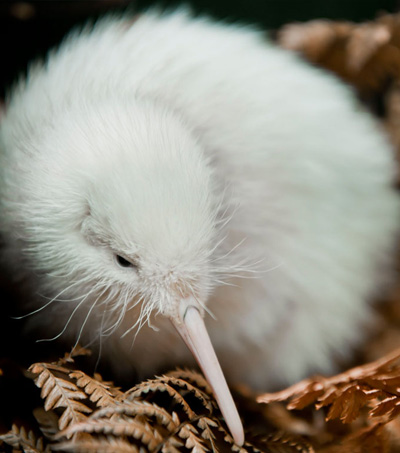 Together with their three older siblings the kiwi chicks are likely to be the only white kiwis worldwide.

Centre manager Helen Tickner said it was like winning the lotto.

Both parents are brown, but hold the recessive white kiwi gen. The two kiwis have not been brought together on purpose. According to Tickner they simply found each other.

The first of Pukaha’s white kiwis, Manukura, hatched in May 2011 and can be seen in the reserve’s nocturnal kiwi house. Her brother Mauriora, hatched the same year, roams wild. The third sibling, Mapuna, hatched in November 2012 and is off the reserve getting medical attention.

Kiwis are native to New Zealand. With only about 40cm they are the smallest ratites and are unable to fly. Today kiwis are endangered as dogs, cats and foxes prey on them.